Thank you! A BLINCYTO® (blinatumomab) representative will be in touch with you soon.

MT103-205, the pivotal study of BLINCYTO® in pediatric patients3

‡All patients treated at the stepwise dosage of 5 or 15 mcg/m2/day in phase 1 or phase 2.4

Primary endpoint was CR/CRh* in the first 2 cycles3,†

Within the First Two Treatment Cycles of BLINCYTO® 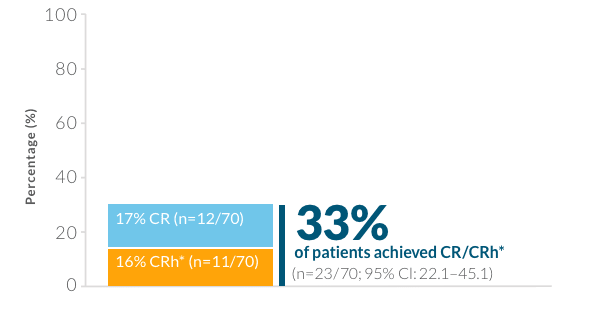 13%
of patients in the BLINCYTO® arm and 16.7% of patients in
the chemotherapy arm had an unfavorable prognosis

EFS for BLINCYTO® vs chemotherapy1

Patients who did not achieve remission or died before assessment were assigned one day of event-free survival. Patients alive and event free were censored on their last assessment date.

2-year OS for BLINCYTO® vs chemotherapy1

More patients who received BLINCYTO® proceeded to HSCT while in remission1

Ability to proceed to HSCT

Enrollment was terminated early in the HR and IR groups due to encouraging efficacy and lower rates of serious toxicity in the BLINCYTO® arm vs chemotherapy, based on a recommendation from the Independent Data Safety Monitoring Committee2

BLINCYTO® demonstrated improved DFS and OS vs chemotherapy for high-risk and intermediate-risk pediatric and AYA patients2,***,†††

2-year DFS for BLINCYTO® vs chemotherapy2

OS for BLINCYTO® vs chemotherapy2

MRD response after cycle 1 of BLINCYTO® vs block 2 of chemotherapy2,††††

‡‡‡‡MRD < 0.01%, evaluated in a central laboratory by flow cytometry.2

§§§§In this analysis, positive MRD or no MRD data are considered as not having negative MRD. The rationale for including patients with no MRD data is that the lack of MRD data was due to death, relapse, or removal from protocol therapy because of an AE or other poor response to therapy, so it is appropriate to include them as the converse of the optimal outcome of being able to submit a sample and have negative MRD.2

See the safety results of BLINCYTO® vs chemotherapy in COG AALL1331

BLINCYTO® is contraindicated in patients with a known hypersensitivity to blinatumomab or to any component of the product formulation.

BLINCYTO® is a registered trademark of Amgen Inc.